One of the most accurate methods to clear build-up and blockages from pipes and drains is water jetting. A high-pressure water jet is used to clear away any debris in pipes, often found in difficult to reach parts of drains. 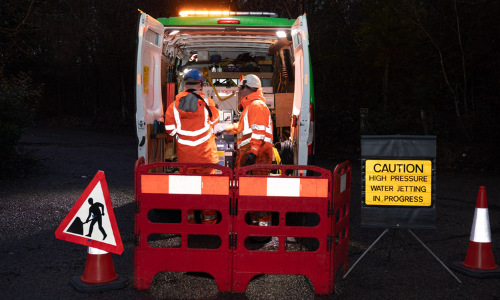 Ways a drain can become blocked

Drains can become blocked for a number of different reasons, it all depends on what the drain is being used for and where it is located. Some of the most common reasons a drain can block are:

There are many different ways to clean drains, such as chemical treatments, rodding, electro mechanical cleaning, vacuumation and water jetting. Each has their own benefit, and are used for different types of blockages, depending on the severity. Water jetters are the most commonly used solution as they are most effective and can be used against most blockage types. Chemical treatments aren’t guaranteed to fix the problem, and will take time to break down the blockage, whereas water jetters can clear the blockage efficiently.

Rodding can help to fix shallow blockages, or blockages near drain access points (manholes, rodding eyes and inspection chambers), however they can’t reach deeper into pipes. Water jetters can move along the pipework and clear blockages deep below the surface.  Vacuumation can be used to clear the built-up liquid in the drain, as well as the debris that is causing the blockage, however if it’s a stubborn blockage then water jetters will need to be used to clear it. Large tanker vacuums are used when there is a large volume of liquid built up, where jetting the blockage would clear the issue, however the volume of liquid released would overwhelm the drainage system. Or where the liquid built up could potentially be harmful to the environment, so can’t be jetted into the water system.

How to prevent a blocked drain

Regular maintenance of pipes can prevent blockages occurring, and can save you money fixing emergency damages or blockages. Water jetting is a great way to clean pipes to ensure that there is a steady flow through your drainage system. You can use regular chemical treatments to ensure that your pipes are clear, however you cannot guarantee that these will work, and they can also contaminate the water, damaging the environment.

Another way to prevent a blocked drain is to be mindful about what you put into your drains. Contaminants such as grease or wipes can collect over time and lead to a blockage, so it is recommended to only put wastewater and toilet roll into your drainage system. If you create a large amount of grease, such as in a commercial kitchen, then it is worth installing a grease management system to prevent any fat, oil or grease entering your drainage system. These are designed to catch any grease in your waste water system before it enters your drains. This helps to keep your pipes clear and prevents any damage to the environment as well.

If you have a blocked drain, or would like to keep your drains clean to prevent blockages, our expertly trained engineers are on hand to help you. Click here to find your local engineers.