Immediately before joining Metro Rod, Sue Caulfield was a housewife and mother of two, living in Germany where her husband’s job was based. However, when Sue’s husband at the time was made redundant, she and her family moved back to the UK and they had to look for an alternative career path.

Following research, Sue read an article about franchising and was interested to discover that franchising had a much higher success rate compared to starting a business from scratch. Sue tells us a little more about what attracted her to Metro Rod, nearly twenty years ago:

“I was particularly impressed by Metro Rod’s good reputation and proven track record of success – they were a well-established company and had been running as a franchisor for around 15 years.

“I felt that me and my husband could really bring something to the business – he could complete the work whereas I would complete the bookkeeping and administration. It was reassuring that we would have the help and support of the Home Team throughout our journey.

“Ultimately, there was a much greater chance of us succeeding in an already successful company with a proven method of working, as opposed to starting an independent business ourselves. It was useful to have the constant available support from the Home Team and the Support Centre, as well as the operations manual to help and advise us.

Sue tells us a little more about the training and support that she and her ex-husband have received from Metro Rod over the years:

“My husband at the time received very comprehensive technical training at Metro Rod, he completed various qualifications and then was ready to go. On the other hand, I received training on the paper work side of things.

“Overall, Metro Rod have always been very supportive, especially during personal difficulties such as a divorce in 2010.” Sue and her ex-husband split the ownership of their Metro Rod business, as they covered two territories at the time.

“Although we are now a well-established franchise and are self-sufficient, I still speak to the Home Team at the Support Centre frequently which is very useful. I’m able to take advantage of the various training on offer, including the more recent plumbing technician training, and have embraced the new systems and procedures over the years.”

Sue also explains how the ongoing support from the Home Team has enabled her to grow their business, in ways that would not have been possible if she  had set up independently:

“The ongoing business support and guidance I receive allows me to concentrate on running the business, remain compliant and grow and expand.”

“We now work for a few Blue-Chip companies, though mainly third-party FM companies. Our key accounts provide approximately 60-70% of our turnover. We started in 1999 with one van and now run 6 vehicles, including a lining van, crawler camera van and excavations vehicle. Our turnover has gone from £80,000 per annum to our anticipated turnover this year of £600,000.”

So, Sue’s business has gone from strength to strength since she joined the network in 1999. Through hard work and determination, she has been able to build an extremely successful and well-established business:

“Being a Metro Rod franchisee is full on and I work long hours, however once my children were teenagers I was happy to put in the extra hours and my earnings enable me to live very comfortably. I now have my eldest daughter working in the business and my two son-in laws. This makes me very happy and I am very confident that they will be able to take up the reins of the business as I slow down a little over the next few years.”

So, we asked Sue if she had any regrets or would do anything differently:

“I have no regrets at all, I have always enjoyed what I do and I think I am pretty good at doing it. We were Metro Rod Franchise of the Year 2013, NatWest Small Business Winners of the Oxfordshire Venus awards in 2014 and in 2015 I was a finalist in the British Franchise Association/HSBC Franchisee of the Year awards.

There is little I would do differently, my job has been my passion for a long time now, and it still keeps my interest. I can’t imagine stepping out of the business but I do feel that in the next few years I will take a step back, and let the younger generation take it forwards.”

When asked what advice she would give to someone thinking of going into Franchising, Sue advised the following: 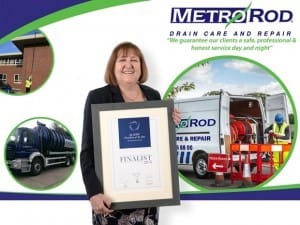 Subscribe for more information about our company and the latest news and updates from Metro Services Group.