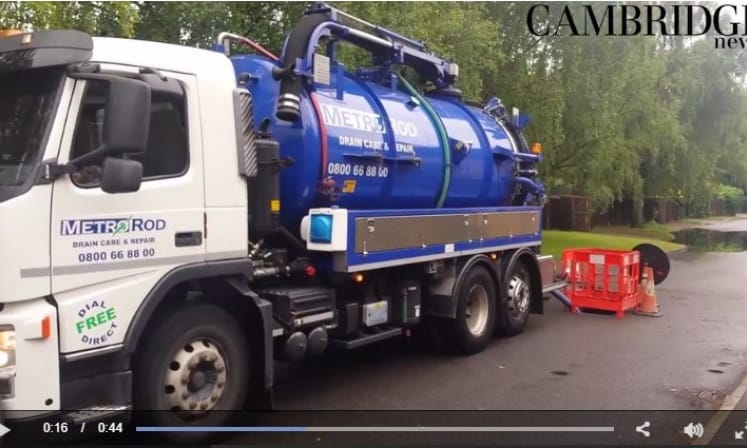 Metro Rod to the rescue

With the unpredictable British climate, flash flooding can occur even in mid-summer, and this was the case for some of the residents of Cambridge last week, after heavy rain showers left drains over flowing, causing localised flooding.

Metro Rod Cambridge were called in by Morgan Sindall and one of their highly skilled engineers, Shaun Russell, quickly got to work using their specialised vacuum tanker, which is able to clear around 2,000 gallons of water in just a few minutes!

“It’s all in a days work,” comments Shaun, modestly. “Flooding can obviously cause major damage, especially to property, so we work 24/7/365 to alleviate this risk wherever possible.”

It just so happened that local news team ‘Cambridge News’ decided to film the clearing of the drains as engineer Shaun was getting to work.

A day in the life of a pump engineer WHY WE ARE THE BEST OPTION FOR DRAIN REPAIRS – METRO ROD MID WALES TRICK OR TREAT….. Blocked toilet in London ? How to avoid or resolve CEO Sleepout Newcastle Drainage is Important in Construction – Metro Rod West Yorkshire

Oh What a Night!

Launching back in April of this year, the team at Ely Hero Awards, organised by local drain care company

Metro Rod (Cambridge) organises local businesses at Chettisham Business Park, Ely to all chip in and donate prizes for